I ran across an outline that I believe will make a great Easter Sunday Morning message. It has the resurrection story, salvation message and challenge to evangelize all in one.  It can be easily expanded or reduced.  I think I’ll use it this Sunday at Salem Baptist Church in Cincinnati.

THREE WORDS OF INSTRUCTION ON THE FIRST RESURRECTION MORNING
MATTHEW 28:1-10
Christ rose the third day after His death; Just as He had said He would.
NOTE ON VERSE 10: The disciples had just shamefully deserted Jesus in His sufferings; but, Jesus demonstrated his forgiveness (and teaches us a lesson in forgiveness) by calling them brethren. Notwithstanding His majesty and purity, and our unworthiness, He still condescends to call believers His brethren.

You do not have to Fear circumstances
A. From the … Quaking of the Earth. v 1-2
B. From the … Presence of the Guards.
C. From the … Powers that be Civil or Religious
D. From the … Presence of Angles.
E. From the … Removal of the Stone
If God says it is finished in the Crucified One what can we add to that. In the final months of Jesus teaching on this earth He never talked about His death without also mentioning the resurrection.
WE DON’T HAVE TO BE AFRAID

Illustration: The little 4 year old girl awakened from her nap and did not hear anyone. She called out and got no answer. She started crying. Her mother heard her and came and said, “Honey didn’t I tell you I would not go off and leave you.” The little girl said, “Yes, but I thought maybe you forgot.” Parents have forgotten but thank the Lord Jesus never forgets His promises.

1Peter 5:7 “Casting all your care upon him; for he careth for you.” 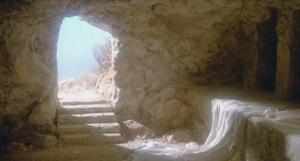 It may have a good effect upon us by faith to view the place where the Lord lay. It was good to be there, but the servants of God have other work appointed.
A FEW YEARS AGO, I HAD THE OPPORTUNITY TO SEE THAT EMPTY TOMB FOR MYSELF.

A. There is an INVITATION – Come
… Jesus wants you to come and see.

The Samaritan woman – John 4:29 “Come, see a man, which told me all things that
ever I did: is not this the Christ?”
Matthew 11:28 “Come unto me, all ye that labour and are heavy laden, and I will give
you rest.”
Revelation 22:17 “And the Spirit and the bride say, Come. And let him that heareth
say, Come. And let him that is athirst come. And whosoever will, let him take the water
of life freely.”

B. There is an INVESTIGATION – See
I am thankful that as Christians, we have nothing to hide. We can say, “come and see,
we have a risen living Saviour.”

Real Christianity can survive every investigation. What do we find on investigation? …
An empty tomb and a living Saviour. Praise the Lord!

Most major religions of the world adore some great but dead leader or philosopher. Christianity alone declares its faith in a living, resurrected Saviour.

Muhammad asks his people to die for him / Jesus died for His people and asks us to die to self and live for Him.

ILLUSTRATION: a missionary was explaining this truth to some people. He said, “I am traveling and have reached a place where the road branches off in two directions. I look for a guide and find two men. One is dead and the other alive. Which of the two should I ask for directions, the dead or the living?” The people responded, “The living. ” “Then,” said the missionary. “why do you follow a leader who is dead instead of Christ, who is alive?”

A. Tell with a … Priority “go quickly”

B. Tell with a … Plan “tell His disciples that he is risen from the dead”
God’s plan has always been a person to person plan

Illustration: Over 30 years ago there was a revival of the God is Dead Philosophy. a
preacher said, “That can’t be true. I am part of the next of kin and I was not notified.”

C. Tell with a … Passion “they departed quickly…and did run” When they responded with
a passion Jesus met with them. “Jesus met them…”

WHEN WE SERVE WITH HIM WITH A PASSION, JESUS WILL MEET WITH US

Let’s move with passion in obeying the great commission (Matthew 28:18-20)

Let’s tell the world of our Resurrected, Living Saviour. Win the lost at any cost.